Spain’s CYPE has been engaged in AEC software development for 37 years. Following the company’s Open BIM strategy, CYPE developers have since 2019 been using C3D Labs’ geometric kernel and file converters to add innovations to their software. Programmers implemented the new C3D kernel in the 3D program and debug it in a record six months.

This last summer, CYPE launched the 2021 version of its AEC program containing tons of new features and improvements. One of them is CYPE Architecture, a brand new tool for the design and 3D modeling of buildings, developed with C3D Labs’ kernel and converters.

CYPE Architecture allows designers to undertake 3D architectural modeling without being restricted by the geometry. As the work takes place in an Open BIM workflow, users prepare 3D models with which they can then carry out energy simulation and HVAC calculations, generate bills of materials, perform clash detection, extract plans and documentation, and generate reports -- all without the need of third-party software. 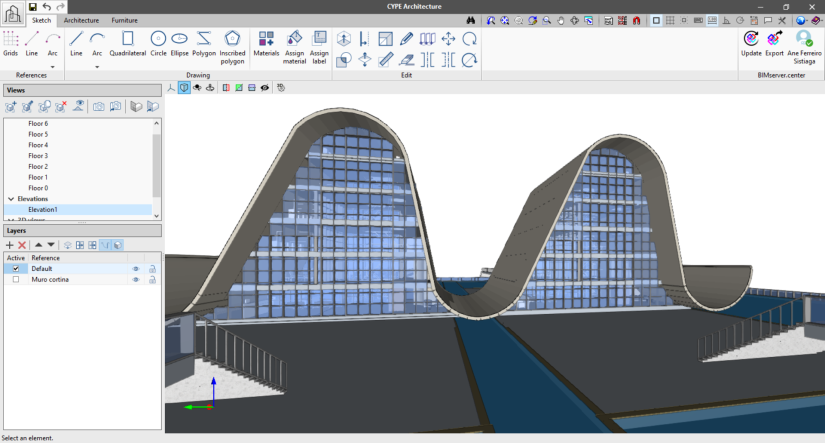 CYPE’s developers explain how CYPE Architecture works: it consists of three primary user work areas that proceed from Sketch, to Architecture, and then Furniture. The newly developed module is a mix between sketching and traditional modeling, an approach more suitable to architects as it enables them to begin working at the initial conceptual phase, and then reuse their work for 3D modeling.

Sketch is a polyhedral non-manifold mesh modeler. It doesn’t employ the concept of solids or of components; instead, it is similar to half-edge data structures, but with 1-to-n surfaces attached to each edge. The role of the C3D Modeler is to construct regions, the solid areas of regions including holes. It handles the conversion to mesh data for the scene graph.

The CYPE development team decided to use the C3D kernel here, instead of their own tools, for two reasons: It is faster and more robust; and because they are considering extending it to curved surfaces.

Furniture doesn’t use the C3D Labs components directly, but some of the objects have been preprocessed using the C3D Converter data exchange module in the asset conditioning pipeline.

More than 90,000 users trust CYPE's products and services, with over 100,000 licenses acquired by professionals in many countries. CYPE software is available in English, French, Italian, Portuguese, Spanish, Catalan, German, and Chinese.

To learn more about how our C3D Toolkit can contribute to your AEC software development, visit our AEC & BIM page at https://c3dlabs.com/en/applications/aec-and-bim/.